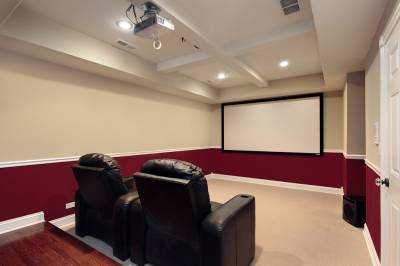 The Ultimate in Home Theater Design

The Ultimate in Home Theater Design

Depending on the amount of money that one chooses to spend, a home theater in Pittsburgh may cost a few thousand to tens of thousands of dollars. While some may view this investment as extreme, consider some of the most outrageous home theaters and systems in the country.

Imagine having the ultimate man cave. The Bat Cave created by one family features stone-like walls, stalactites and stalagmites that all realistically give off a warm amber glow. The floor, hanging lights, plush-leather seating and equipment provide a contrast in black. The front of the room features a massive silver-metallic rectangular panel embossed with the signature black bat emblem. The panel is designed to open from the center, which reveals the viewing screen. The set-up cost a mere $500,000. For $1.5 million more, you might include a Batsuit, the Batmobile, a private stainless steel elevator, a secret tunnel and a 180-inch viewing screen. A fingerprint is necessary to gain access to the location dubbed the “Dark Knight Home Theater.”

A family in Florida spent $2.5 million on an elaborate system designed to commemorate the Pirates of the Caribbean movies. The entire complex is indoors although the entrance to the room was created to mimic an old waterfront tavern lining a cobblestone street. Inside, guests initially have the chance to get refreshments at the tavern/lobby area overlooking the amazing screening room, which very closely resembles the deck of a pirate ship. Completely encased in wood, the décor includes the ship’s rigging comprised of folded sails, ropes, wooden railings and barrels. Three wooden tiers serve as the platforms for the dark-leather upholstered recliners.

If you are a Star Trek fan and are lucky enough to have an empty 22 x 70 foot space, you might transform the area into the bridge of the Starship Enterprise. The space was divided into the theater, a bar and a ready room. The multi-million dollar project includes motion-activated air-lock doors, which have sound effects. Eight servers contain the software that controls the special effects along with storing nearly 4,000 DVDs.

This entry was posted in Fun Ideas, Home Theater Design. Bookmark the permalink. 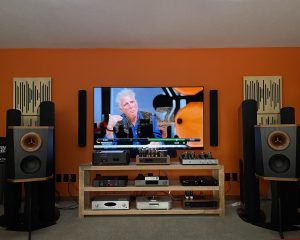